Everything happens for a reason

In my writing, I tend to use “and” much more than any other transition word. Another pattern I notice in my writing is that I repeat many of the key terms over and over again throughout my paper. I rely on repetition more than other devices discussed in this section of reading. When talking about a topic I tend to explain my ideas in new ways rather than expanding the ideas further. Adding more unique transition words and limiting pointing terms would overall make my writing stronger and more clear. 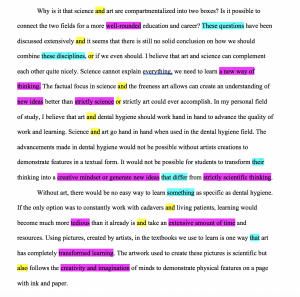 An interview of my mother Karen Genest on how September 11th, 2001 changed her life and her personal identity

Your essay does a great job of stating the textual evidence and creating an intriguing argument for why the arts and sciences should be combined. Your quotes are the perfect possible quotes to help support your thesis and really add to the overall strength of your paper. One thing your essay could really benefit from would be introducing pharmacy into your essay much sooner. You do a great job talking about art and science in general but creating a more personalized and focused paper, you would be able to go more in-depth on what you really want to say. All of your evidence and analyses are really strong and informative. Elaborating on what you already have down on paper would really enhance your paper.

You have a very strong writing style and are off to a great start. 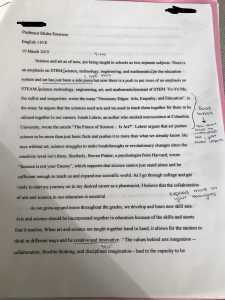 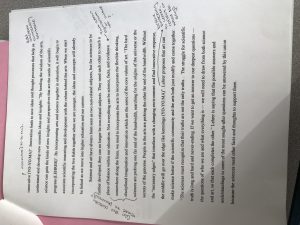 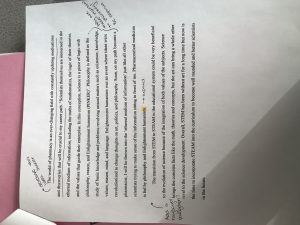 A strategy that I enjoy working with because it allows me to get all of my ideas out on paper and readjust my thinking.

Our essay prompt is to discuss our personal perspective on the integration of art with our particular major. In my case, I am looking at art and dental hygiene. Initially one would not think that these two disciplines correlate very much, but after taking a step back and identifying how science and art depend on each other, it is easier to see just how important art is in dental hygiene. A few different reasons I believe art belongs in dental hygiene starts as early on as the courses we take in college before ever touching a single tooth. I am enrolled in a drawing class as a requirement for graduation. While I thought this would be pointless, the lessons I am learning in drawing can be applied to all areas of my life. Learning to take a step back, pay attention to detail, and have a creative, carefree attitude when problem-solving.  Another important course that can be taken in college would include a sculpture class. For dental technicians, dealing with creating molds and models is a very important piece of their job, and having a background in creating structures can be extremely helpful. Beyond the years learning in college there are examples of art see within the dentist office itself that depends on the presence of art. In the office, some examples of ways that art is used are through the music playing and the pictures drawn on the ceiling tiles meant to be something to look at while getting your teeth cleaning. The denitist can be a very scary thing for many people so providing calming music can make all the difference in the experience. The art on the cieling can provide a place for small childnre to stay focused on and another calming effect that can shift the overall mood of the office. Along with these few ways art can impact dental hygiene as a career, there are millions of other examples that lead to the overall extreme importance of the integration of art and science.

Science is said to be the only way to explain life’s phenomenons. If it can not be explained in a scientific way, then is it really accurate? Jonah Lehrer challenges this idea in his article “The Future of Science… Is Art?” by stating, “One day, we believe, science will solve everything. But the trajectory of science has proven to be a little more complicated. The more we know about reality, the more palpable its paradoxes become”. Lehrer begins to develop the idea that science can complicate reality just as much as it explains it. There becomes a thin line between believing science is key and the disbelief that we will ever know all there is. In Steven Pinker’s essay titled, “Science Is Not Your Enemy”, he further develops this idea that science may not be the answer to everything by saying, “To understand the world, we must cultivate work-arounds for our cognitive limitations”. Both of these authors understand and explain that while science does set the basis for world ideas and how things work, we must be open to knowing that not everything is solely dependent on atoms and genes but can be influenced by many other aspects of life like religion and behavior.

Religion and science have a hard time mixing due to very extreme beliefs from each party. Many scientists believe they are right while many religious followers believe their philosophy and explanation is the only truth. Steven Pinker explains in his essay titled “Science Is Not Your Enemy” that, “The moral worldview of any scientifically literate person requires a radical break from religious conceptions of meaning and value”. Pinker’s point of view shows how he believes it is difficult to mix the religious and scientific mindset within the world. This exact dilemma has been floating around my mind for the past few months. I began attending church and while I enjoy the overall message, I continue to have a difficult time melding my scientific knowledge with the religious stories and explanations of why things occur. Pinker’s idea connected with my own personal experience shows that the complicated connection of science and religion is a real issue that many individuals know all too well.

Theme by Anders Noren — Up ↑